” I tried to pull through the back of a big closeout. The backwash off the rocks surged me into the sand head first. I heard a pretty scary crunch in the back of my neck.” 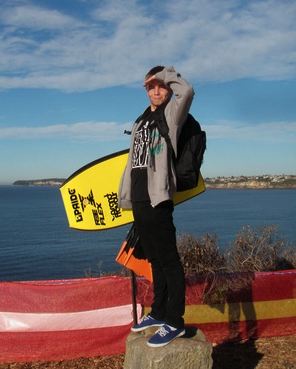 Lewy Finnegan, one of Australia’s hottest groms and tipped as a future World Champion, answers a few questions about his neck injury surfing his local WA wave, the Box.

What’s your favourite wave at home?

LF: The Box, it’s got heavy barrels, big bowls and is relatively easy to get waves out there.

LF: The best wave I’ve ever seen with my own eyes is Pipeline, but the most fun i’ve had surfing abroad is probably a wave in Samoa. It’s an isolated left reef break with a wedge takeoff that never gets crowded.

LF: At box I once  saw a stand up pull into a closeout and come up screaming for help, so I looked closer at him and saw his whole face was almost peeled off. He got rushed to hospital. He ended up breaking his foot as well.

Where were you when you had your injury?

LF: I was at Mandurah wedge on an ordinary day with just my friends out. Nothing was different that day at all to the past few weeks that I had been surfing it.

People often injure themselves in surf that they’re not expecting to. Were you feeling comfortable about being out there?

LF: Yeah I felt fine, my injury was on my first wave, so I wasn’t really used to the surf that day, but I was completely relaxed and comfortable out there.

LF: I tried to pull through the back of a big closeout. Just as I dove off my board, the backwash that had rebounded off the rocks just surged me into the sand head first. My head went forward until my chin hit my chest and I heard a pretty scary crunch in the back of my neck. I wasn’t underwater for long at all, the backwash just pushed me off the back of the wave. I actually had a pretty bad sand graze on the top of my head too haha!

How did you know it was serious?

LF: Instantly! The pain was unbearable and i found it extremely hard to move anything without it hurting my neck.

Did you have any problems moving your limbs?

LF: No, I could move my limbs fine. I couldn’t really tell if I had numbness because once I got out of the water I was freezing so I could have just been numb from that.

Was it hard to swim?

LF: Yeh so hard, every paddle just killed my neck and back.

How did you get to shore?

LF: One of my friends helped me paddle around the rocks. The beachie on the other side was about 6 foot and heavy but as soon as I got near there it went dead flat. I quickly paddled in, got changed slowly out of my wetty and laid on the shore until the ambulance came.

What was it like being put on the board and head support?

LF: It was a pretty big relief to know that all the damage had been done and that I wasn’t going to screw it up anymore.

What happened when you got to hospital?

LF: I was tripping pretty hard on the green whistle (Entonox) and had some morphine injections.. I waited for hours to get an x-ray. My parents actually drove down to the hospital to see me so I just chilled with them until I got my results.

What was going through your mind at the hospital?

How are you doing now?

LF: Two and a half months on it’s still pretty stiff and a little bit sore, but it’s slowly getting better. I’ve been getting a lot of physio which is helping a lot as well.

How long were you out of the water?

LF: It took about a month until I started surfing again and then another month after that until I started trying to do bigger airs. I’m still not completely comfortable with doing anything massive yet.

What are you plans for the future?

LF: Im in Hawaii at the moment which is good. This year I just want to travel as much as I can and try to improve my surfing. But short term, I just want to get this injury behind me.

LF: Yeh, cheers to Davis Blackwell who helped a lot when i injured my neck. Cheers wingazz!

Find out more about neck and head injuries from our articles.

Lewy mixing it up a couple of years ago.

Help Us To Help More Surfers & Bodyboarders By Spreading The Word: